One of the most famous and consumed ingredients of the world, and the best friend of pizza in most Countries worldwide. Ladies and Gentlemen, we present you Sir Caper!

With a feather weight of only a few grams, green and smelly (but not sweaty), and strong against cholesterol and disease, he is the winner of his light weighted category. Among all the small fruits you can find this one is tasty, healthy, and beautiful.

DO YOU WANT TO GROW CAPERS IN YOUR GARDEN? BUY A HOUSE IN THE AEOLIAN ISLANDS, IT’S WAY EASIER!

The caper plant needs awfully specific conditions to grow, and only prospers in the Mediterranean and in a few more places under the Tropical Belt.
It needs poor, sandy sublayers, rich in calcium and well drained.

Exposure to the sun must be good, but needs some shelter too, at the point that its flowers usually open when the sun sets. Germination requires good natural conditions, and must be practiced into rock cracks, or walls (even if the most practiced here is into the soil). If you start from a semi-woody talea, it will best grow in greenhouse, for a fully supported and attentive cultivation, but it still requires a lot of pampering.
Think that its natural chances of germination from a piece of wood are around 12%, and if you choose to try to make it grow through seed germination they fall to 5%. So, if you are going to try, try for good!
It’s probably way easier for you to buy a house with a garden in a location 100% fit for this kind of agriculture, rather than forcing capers to grow in difficult conditions.

WHAT ARE WE EATING EXACTLY? 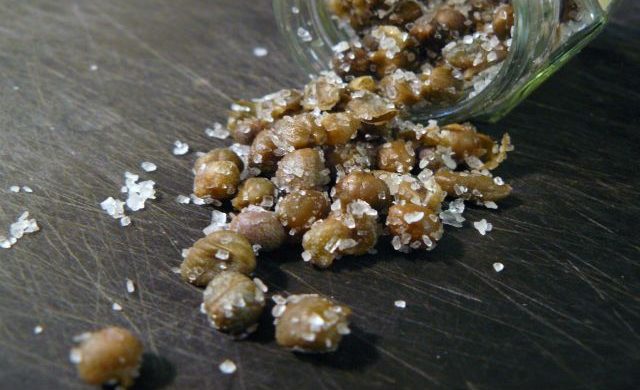 People often don’t know where the capers come from. It’s mostly ignored how the plant produces its fruits, where it comes from, and even the structure of the caper plant itself is often an unknow mystery.
There are several types of caper plants, with different perks and qualities, but, unanimously, the caper of the Aeolian Islands is the true best caper of the world. It grows slightly rounder than others, has a stronger flavor, a better smell, and it is so good that it invites to the consumption of its fruit final counterpart, called cucuncio.
The cucuncio is the last stage, the apex of the caper plant: from the caper, the plant grows its flowers; from the flowers it grows its long pistil, that’s to say the cucuncio, commonly classified as a small fruit, today not known as appreciated. The cucuncio (or “cucunciu” locally) is widely appreciated for its taste and its texture, soft inside, and kind of crunchy outside. If you happen to be here, you must give it a try.

WHY IS THE AEOLIAN CAPER THE BEST CAPER OF THE WORLD?

Capers from the Aeolian Islands, now overseen by Slow Food, grow since ancient times and are a heritage of the Aeolian Archipelago. They are witness of the passing of time, and if you think that they had been reproduced mostly through talea implants, they really descend directly from the same wood of the same plants from the tales of the ancient Greek and Latin civilizations. Pollara is the best place to find this heavenly fruit.

If you go to Pollara, go visit the locals, since they are the most famous producers of the place.
One good experience to do there is the capers picking. Capers grow since May to the end of September, and generally the picking was once a work carried by women only, underlining that it was a tradition to have men going for fishing in the meantime, confirming that the Aeolian population strongly relied on fishing before agriculture became popular. The caper picking must be done during the early morning, because capers require being relaxed and at the top of its shape, besides being it a lot easier to go picking with low temperature rather than under the sun.

Think that the caper plant does not grow tall, so you must stand crouched or on your knees for picking them one by one with your hands. You can’t even stripe the fruit from the branches because the plant grows spikes as well. That said, we can all agree that it is not only hard to make it grow, but it is somehow hard to harvest its fruits. The caper is definitely not a plant for beginners, and experienced farmers should think twice before planting it.

Anyway, the pure caper is not the only thing you would want to eat; there’s a lot more. Fresh salty capers, in-oil, in-vinegar, are the most common ways to taste them, but if you prefer there’s also the candied caper, for a particular taste that goes even in desserts like tiramisu. There’s a lot of good sauces with a caper base, with tomatoes and/or basil, and for the best experience, try the candied capers in a very special (un)traditional panettone. The modern cuisine is embracing more and more the use of the leaves for cooking and/or for raw recipes.

Another component to consider, is the size of capers. Common sense has always told that the best caper is the small one. Today we’ve come to a turning point where we are reconsidering the use of the big caper, called “capperone”, side in fish recipes and salads, and even consumed alone as it is.

And for you, which is the best caper?

This website uses cookies to improve your experience while you navigate through the website. Out of these cookies, the cookies that are categorized as necessary are stored on your browser as they are essential for the working of basic functionalities of the website. We also use third-party cookies that help us analyze and understand how you use this website. These cookies will be stored in your browser only with your consent. You also have the option to opt-out of these cookies. But opting out of some of these cookies may have an effect on your browsing experience.
Necessary Always Enabled
Necessary cookies are absolutely essential for the website to function properly. This category only includes cookies that ensures basic functionalities and security features of the website. These cookies do not store any personal information.
Non-necessary
Any cookies that may not be particularly necessary for the website to function and is used specifically to collect user personal data via analytics, ads, other embedded contents are termed as non-necessary cookies. It is mandatory to procure user consent prior to running these cookies on your website.
SAVE & ACCEPT

We promise not to disturb you too much

WhatsApp Chat is free, download and try it now here!